Three years ago in August, I was preparing for my first craft show since moving to Richmond, Virginia. I had just moved earlier that summer, and was having trouble finding a job. I really didn't want to work at the same food service chain that I had left when I lived in Portland, Oregon, yet I also didn't have much luck finding places who were hiring (or would hire me, at least). After making a few feeble attempts to transfer to said Food Chain, I decided to stop trying. I had more time on my hands, and less money. However, I had been so unhappy working in food service that I decided I would use my time by diving into anything art-related I could find in Richmond. I volunteered for three months at The Visual Arts Center of Richmond (where I would later teach). I made a new zine about my observations of being in Richmond. And I scouted out for any craft fairs I could be a part of. My first was the annual Jonny Z Fest, organized by Art 180.

A few days before the fest, I decided to make a very quick rendition of my own "tarot" deck. But instead of traditional tarot images, I would use my own imagery. I was never a very skilled reader of tarot, but I was fascinated by it and other forms of divination such as I Ching and Runes. I had learned from my limited encounters with these forms that there are many ways to express similar sentiments and concepts, and that each form has its own special slant based on the culture and time period it was devised in. I decided it would be easier for me, as an artist, to create my own imagery that I felt could speak on a personal level to me, but also be highly relatable to others. 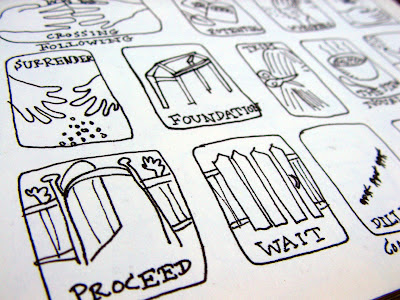 I sketched out tiny little rectangles in my sketchbook and quickly filled them with images and corresponding "titles." The drawings and concepts poured out of me as if they'd been incubating for years and just needed the opportunity to be released. After two short drawing sessions, I think I had about 60 cards sketched out. I cut up pieces of cardstock and drew the images onto tiny cards in the same simple, bare-bones fashion I'd made the sketches. I figured I would work on perfecting the drawings at a later time. After consulting with my sister and then-boyfriend, I decided I wouldn't title the cards. I always found it difficult in tarot to separate the meanings of the cards from their names. Some cards like "Death" or "The Devil" immediately inspired negative connotations to me that were hard to shake even when I knew that their symbolism was deeper, more subtle, and at times opposing to what I thought they were. My decision to not title the cards was also inspired by a deck called "SoulCards" which had images without titles or predefined meanings, meant to evoke creative expression and interpretation from the reader without any previous experience. 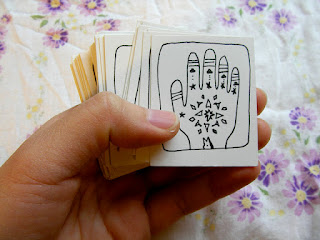 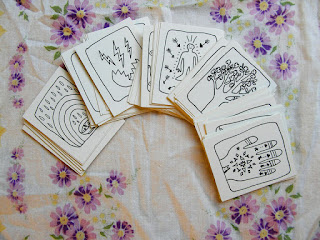 I was excited and nervous about bringing my cards to the craft show. I had never done a reading for a stranger before, and certainly never asked for monetary donations for doing one. But for some reason, I had confidence that the cards would "work." I had done "readings" in the past for people that were nothing like tarot readings. It's hard to explain without giving it away (which would defeat its purpose), but it's a visualization exercise that I found in a young adult novel years ago. I asked people to describe what they saw when given a certain situation and objects to visualize. I would draw these things and make notes about them that they could look at later. From their descriptions, I interpreted what each thing meant about themselves and their personality. I found that people almost always responded in a surprised fashion at these interpretations, amazed at how well the interpretations seemed to represent them. I realized I was good at those kinds of readings because I am an artist and I am highly drawn to symbolism and visual representations of what goes on "under the surface." For that reason, I believe my visual language/intelligence is more finely-attuned and one of my strongest assets.

I did three card readings at the Jonny Z Fest. Honestly, I can't remember too much about the readings. I knew I had to be confident and trust the cards in order for them to work. I had to have faith. One person responded in a sort of neutral fashion, but I remember that one lady seemed really excited about her reading. All I remember is that it was enough for me to feel gratified about the whole process myself. I had helped a few people gain some clarity over situations or problems they were facing, or at least gave them another way to look at things. The cards related to their questions in a way that was not purely coincidental or random they way some newspaper horoscopes seem to be. I had dialogues with strangers about their personal matters, connecting in a way that seldom has the opportunity to flourish under normal circumstances.

For the last three years, I have honed my own reading style more and more. That is not to say that I am an expert. There are times when I lack confidence and feel that I am not giving the Questioner the experience or answers they had hoped for. However, I've found that it's impossible to please everyone. The majority of the experiences I've shared with others make the process of reading cards to be enjoyable, enlightening, and satisfying to me. I used to think I was "telling the future" for others. But I am not a psychic. At best, I can be highly intuitive, at worst hesitating and doubtful. I've found that reading cards for others is part divination/part healing process - allowing others to share their uncertainty and view situations from a new perspective. I've observed people become emotional, shed tears, release unhealthy expectations, and express joy. I've seen an emotional shift in a person who sat down next to me, from slightly skeptical to elated. To put it visually, it's as if a door opened inside of them and they became filled with light and energy.

As I continue to read the cards, I find that I increasingly ask for input from the Questioner. I find that they have a lot to teach me, in terms of how they interpret the cards and how the images apply to their situation. I think that having a conversation about the cards is an important part of the process, as opposed to me giving the interpretations and not having any input. However, I've read for people who would only nod their head or look at the cards with a bemused expression, who would say things like "this card makes a lot of sense to me" and not  elaborate any further. I've respected their silence as well, for everyone processes experiences differently and sharing should be a purely voluntary response.

Dialogue:
What is your experience using the cards? Did you purchase the cards yourself, or are they a gift from a friend? Have you read tarot before or worked with other forms of divination? How does reading these cards compare? Have you never read cards before? How do you feel as a beginner? Any stories you'd like to share? Questions?

I can't wait to hear all about it! Please leave your comments here and feel free to "talk" to others who respond. I do believe that we can all learn from each other, and I plan to keep writing posts that inspire an active dialogue and friendship among the Golden Moth community. Part of the reason I was so excited to release this deck to the public was seeing how the use of the cards would grow and change through the collective experiences of others. That includes you!

Visit aijungkim.com to see more of my artwork 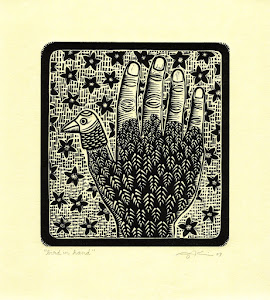 Buy Your Own Deck and More Art Here!

This is a Flickr badge showing public photos and videos from Sprouthead. Make your own badge here.